Tree Agate forms varied green patterns throughout the stone. It is this pattern that looks similar to tree branches that have given Tree Agate it’s name.

The term Tree Agate and Moss Agate have been used interchangeably. If a stone exhibits more of an overall green coloration it will be called Moss Agate, while Tree Agate refers to stones that have a more branch like patterns to their overall coloration.

Agate is ais a microcrystalline variety of quartz. Microcrystalline rocks are made up of many tiny crystals that can only be viewed with a microscope.

Although Tree Agate does not possess the concentric patterns that Natural Agate is known for, it is still considered a form of Agate. 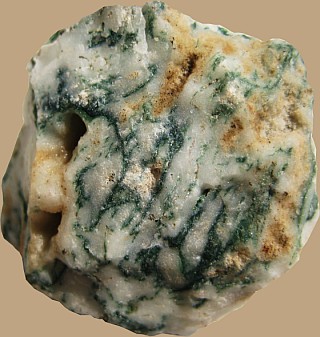